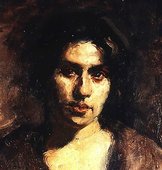 All of them attended the Lacaze Academy and Marguerite Jeanne Carpentier’s workshop in Auteuil. What has become of them? Where are their works located?

Some scarce photographs exist. We know that at her death, Paule Peloux had sold all her pastel work.

A note is written about Charasse in Marguerite Jeanne Carpentier’s diary (1963) : « Charasse, my former pupil, came. »

The name of Lamourdedieu appears in one of Carpentier’s sketchbooks.

Two of Marguerite Jeanne Carpentier’s disciples have been identified :

A correspondence between her and Marguerite Jeanne Carpentier shows that she was a faithful friend ; she helped her financially in hard times, she admired her and she defended her work.

She was born in 1909. She studied drawing in Colmar. At the age of 19, she came to Paris and studied at Lacaze Academy. She also attended engraving classes at Paris School of Fine Arts. Her favourite techniques were pastel, pencil and ink.

She was a talented sketcher who illustrated poems by Ronsard and Verhaeren.

The School of Fine arts, Paris museums and the city of Colmar bought some of her works.