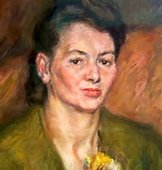 «Her workshop, between faubourg Montmartre and boulevard de Strasbourg, inserts amongst the button makers and the fabric tradesmen - the district masters - a kind of “Pantheon in pastel” (…). The faces she has modeled present common features : eyes with an inner sight or looking beyond things and people ; lips chiseled by the taste for the right word or the elegant sentence ; chins polished by meditation or luxuriant beards curling around the tip of fingers (this is how wise men tame the serpents of science) - such are the qualities that tempted the artist. »

1903 : Birth of Charlotte Musson in Paris

1918 : She attends a drawing school, rue Abbeville, in Paris

1930’s : She settles in her own workshop, rue de l’Echiquier, in Paris. The Canal Saint Martin, the banks of the Seine are the source of many of her works.

She hangs her pictures in many exhibitions.

The French State and the city of Paris purchase some of her works.

1996 and 1998 : Many pictures by Charlotte Musson are donated to the museum and enrich its collection.

… On a pedestal, in a mess of hundreds crushed fragments, a box of pastel is open. It is from this friable substance that she makes her masterpieces.
Régis Saint Hélier in "Femmes d’aujourd’hui" magazine.

You will understand my reactions, you who talks so well about the large void left by the death of Charlotte Musson
Letter from Marguerite Yourcenar to Jeanne Carayon, sent from Mount-Desert Island.

Young Musson, my pupil, has a surprisingly deep and accurate perception, due to a vibrating sensibility. She expresses her thought in a remarkable way. If she had the will to cultivate her mind and to work, what progress she could realize.
Marguerite Jeanne Carpentier’s diary - July 31, 1930

Many beautiful works of art by Charlotte Musson are in private collections : nudes, Parisian landscapes, portraits. Some of them have been exhibited in Paris and Clermont-Ferrand.