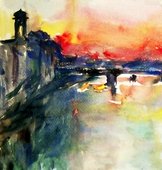 Cyrille SARRIAS, Deputy Mayor in charge of Youth and Culture

are pleased to invite you to experience the works of