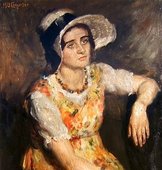 When he reaches the age of 6 or 7, teach your son how to read, then send him to study the trade that suits him. If your child is a girl, give her needlework instead of reading because it is not good for a woman to know how to read unless you intend her for nunnery.
Paolo Certado 1320.

No access to learning : this is the handicap women artists have had to put up with for about 5 centuries. They were deprived of :

Alas God, why haven’t you made me come to the world with male gender ?
Christine de Pisan about 1400.

During the Middle Ages, women’s social status is quite important : they spin and weave, they manufacture basic goods like bread, beer, meat preserves, and they grow medicinal plants they give to the sick and suffering.

However they cannot belong to the artist world, concentrated in guilds : guilds rules do not accept them.

Only a few nuns illuminate manuscripts, or illustrate codex.

Within all Europe, we know the name of about ten female artists, whose work has often disappeared.

All along the Renaissance, the sphere of activities devoted to women shrinks: men absorb the traditional feminine trades, outside the domestic circle.

Artistic life is transferred from guilds to academies and workshops directed by Masters who, through their narrative large pieces of work, seek their personal glory and the favour of patrons.

Women are not admitted to these academies. They lack the required scholarship level and the freedom of movement.

Some of them are an exception to this exclusion:

Recognized women artists are very scarce. They have to surround themselves with an aura of respectability, youth and chastity: they sign “Sofonisba, virgo”, “Lavinia, Damsell, daughter of Prospero Fontana”.

Their art is limited to portraits, self-portraits, still life and religious subjects for which the lack of models is a serious disadvantage. They cannot paint frescoes, landscapes, nor be a sculptor or an architect.

In “The Courtier”, Baldassare Castiglione clearly defines the field of women’s painting:

… as long as she keeps a sweet and delicate tenderness, an appearance of softness in each of her movements (…) so that she always appears as a woman, with no resemblance to a man, she is free to adorn herself with the most refined accomplishments recommended to gentlemen…

1648: Louis XIV founds the Royal Academy and declares he will « grant his protection to artists without consideration for the difference of gender. »

The admittance of women at the academy is most certainly an event but:

However, they have the right to exhibit at the annual art exhibitions. Here are some of the most well-known:

Besides, some well-known painters such as Greuze or Regnault open private academies accessible to women artists. Teaching is limited, but they get the opportunity to exhibit their work.

The influence of women in society is at its climax (Salon of Mademoiselle de Lespinasse, of Madame Geoffrin …). The number of women artists increases.

1789: « Reprehension to citizen Lebrun: she encourages those who would like to occupy themselves with painting instead of embroidering the belts and cloaks of police officers… » Minutes of the Revolutionary Comity.

The French Revolution, after stirring up an important feminine effervescence (Olympe de Gouge writes a Declaration of Women’s Rights, Condorcet lays claim to their access to education, right to vote, authority equality within the couple), will lead to a time of throw-back and segregation.

The Royal Academy becomes the Popular Republican Society of Arts. One of its first act will be to exclude women artists. They are different from men, therefore they should not be allowed to carry on tasks devoted to men. Is this really the dawn of liberty, equality, fraternity ?

Men should take care of everything related to “Grand Art”, of what demands an elevated conception of artistic ideal (…), women should stick to the art forms they have always preferred: pastel, portrait, miniature or flower paintings, all these punctilious works that suit so well the abnegation and self-devotion role every woman is pleased to fulfill on earth and that is her religion.
Fine arts Gazette 1860 - Of the rank of women in Art.

The number of women artists increases by degrees, through a larger strata of society. They teach drawing as teacher or governess, sell their production in shops, and exhibit their work. A small “drawing industry” develops.

Restraints are still numerous, but feminism is on the march with Georges Sand’s writings, and the fight of the American suffragettes. In the middle of the 19th century, Paris is the centre of the artistic world. Women artists get organized: they get jobs, they share their lodgings, and pose one for another. Independent or in the wake of the Impressionist Masters, their names are :

In 1877, the Julian Studio opens. It is the only mixed establishment with the Colarossi studio to dispense quality art education allowing women to work with nude models.

In 1897, Paris School of Fine Arts opens to women artists, but their classes are not mixed, they have to pay their tuition, their models are dressed. They seat for different exams than men.

In 1900, Paris School of Fine Arts opens to women without restriction.

At the dawn of 20th century, what preconceived notions, what prejudice Marguerite Jeanne Carpentier, Elise Rieuf, Charlotte Musson, Frédérique Knoeri and the others of the first women school of art, will have to tackle ?