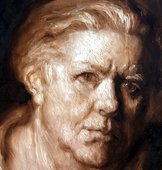 I am definitely slow-minded, prone to deep emotions that do not get along with time – taken in the sense of duration. Now I know how to divide myself, as much as can be, both as a sociable person and a business woman. I do not neglect the needs of my body and my entertainment anymore. And I listen to the din of the deep water roaring inside me, willing to resurrect as a large river.
Diary - November 1940

Oh, to be able to create for myself, protected by a patron who would carry out the solitary splendour dreamt by the great Romantics, Northbound dream moved by ancient Greece remembrance : to ally plastic beauty and Latin limpidity – I mean distaste for impotent confusion - to the mystery of the tragic sense of the North. What a dream!
Diary - Introduction - 1930

1895 : Death of her father. Her mother, Edith Perlstein, is headmistress of a school avenue de Wagram, in Paris. Her elder brother Georges will become an actor and head of the Théâtre Royal in Bruxelles, Belgium.

1897 : Women artists are allowed to attend classes in Paris School of Fine Arts.

1900 : Marguerite Jeanne Carpentier attends the School of Fine Arts in Paris. At the Julian Academy, her teacher JP. Laurens introduces her to Rodin (1907?)

1912 : She stays at the Villa Medicis in Rome, but has to come back to France to take care of her mother who is very ill and will die in 1914.

From 1918 : Marguerite Jeanne Carpentier is the center of a group of young female disciples, drawn by her powerful personality : Elise Rieuf, Charlotte Musson, Marguerite Jettot, Frédérique Knoeri, Paule Peloux, Charasse, Lamourdedieu, … etc. The first school for women ever, with a woman as a master, was born in this early 20th century.

1929 : Death of Georges Carpentier and of Tania Stamatiadis.

1930 : Beginning of the diary. Marguerite Jeanne Carpentier will keep it until her death. Illustrated with hundreds of drawings, beautifully written, this diary is a valuable source of information about her pictorial researches, the genesis of her work, her thoughts, her readings, her buyers … and the alternation of ups and downs of her life.

1936 : Marguerite Jeanne Carpentier settles 147, avenue de Villers, in Paris. Her life is a long struggle to keep her independence and to carry on with her work.

1965 : Marguerite Jeanne Carpentier dies. In 1966, the contents of her workshop are auctioned at the Drouot sale-room.

To knead big masses of flesh of a beautiful carnal and sculptural drawing, alive with an impetuously sensitive style - beautiful well-built bodies, bulky torsos and limbs, slightly touched by light from the side and propped up by beautiful bold touches of paint…
Diary - March 27, 1945

To join an execution in a solid, extremely concrete paste to some kind of spell, is to join soul and body, it is life itself. The soul with its spring, with its unquenchable imagination, that wants dazzle, mystery too ; and the body with all the beauty of the shapes and matter. It is complete Art, observation allied with lyricism.
Diary - September 16, 1943

I went rue Saint Jacques. Worked on the torso of a lying man. The model is a magnificent Italian ; he grinds pigments at Foinet’s, he is young, broad-shouldered, with ample relief like Sodoma (…). I work up my paint with dash and certainty. Never before have I so well understood the setting of a nose, of eyes, than in this light.
To unite this faculty of observation, this bold relief and my imagination.
Diary - August 3, 1930

I went to Charenton to see a site. Lucky for me I did it. I found myself in a wonderful dream : the tall trees had kept their majesty ; some of them were blazing with golden yellow ; and the enveloping softened atmosphere of October was colouring with a strong tonality, the old mossy stones, washed with rust, blurred with light mauve …
Diary - October 10, 1943

Marguerite Jeanne Carpentier spent her entire life in Paris. She elaborated her work there, she sold her paintings there, and she is still captive there today.Consequently, her studio was always set in Paris :

… Been into Notre Dame. Never before has this great gothic vessel appeared to me in such total beauty as tonight. I understand last century poets in raptures with these columns, these trunks gathered in so slender, so prodigiously aerial bundles. The large violet rose-window pours out its light. The whole inner stone wall has a warm mighty gray colour of a matchless beauty, upheld by the dark accents of the vaults and stricken from place to place by golden sun beams powerfully toned. Green and mauve stained-glass windows pierce through the walls.
Diary - November 1930

... Yesterday morning, magic spectacle. The Hôtel Lambert had a light gray-brown tint, with splashes of gold and cream, all this in warm tones in a gray-blue harmony ; the golden-white houses, the pink flying-buttresses of Notre-Dame in the mystery of a thick and bluish sky - the river like melted lead…
Diary - January 31, 1947

Indeed, this workshop is an antechamber or an alembic where my thoughts, my sketches, my lay models, my documents – studies and passionate research – have been elaborated, in pain and in discomfort. God willing, this should logically lead to an intense, uninterrupted production, until my death, as the river, after the last constriction of the tragic canyon, has to merge with the sea in a full-blown and superabundant delta.
Diary - August 23, 1940

It is always unpleasant to me to have to go out in the morning, to forsake the best hours of the day dedicated to reading, pictures, German, sketching, notations : the most fruitful and calmest at my desk. But once outside I seldom regret it (…) First thing, the head of a boy, seen in the metro, whose modeling at once mellow and vigorous, calls up Corregio’s so compact and powerful ones. On my way back home, it will be the face of an old and sturdy man, a touch rustic, with accurate features, eye sockets underlined by a curved groove setting the eyelids, a perfectly shaped canthus, a forehead tightened by the relief of the temples, over slightly salient cheekbones.
Diary - March 23, 1955

I have been walking from rue de Sèvres to the Grand Palais (…) The old mask, modeled like the beautiful van Dyck sketching of a child ; the “Italian corner” at the end of rue Monsieur ; the strong shadows cast by tall trees on the wall ; the Seine with its full gray twirls of melted metal ; the colonnades in the cold shade. I am now under the spell of vigorous, almost monochromatic accents …
I woke up early these last few days, to draw the Hôtel de Ninon de Lenclos. Yesterday afternoon I started the porch of the Hôtel de Lamoignon, but the light wasn’t there.
Diary - Volume V - 1943

Marguerite Jeanne Carpentier’s diary, running from 1930 till her death in 1965, consists of 12 exercise books illustrated with hundreds of drawings.

It informs us on:

It testifies of the struggles of an independent female artist, and the way she tackles major contemporary events such as WW2, Occupation, Liberation, Economical Crisis. It is a document of outstanding interest for the exegesis of her work.

In 1944, Marguerite Jeanne Carpentier gazes by her window at the Parisians rushing to meet the Liberation Army entering the Capital :

I can hear from the south-western distance, the first cannon-shots of the front line…
Diary - Volume V - August 1944

Yesterday I worked four hours in a row on my marble in the garden. Charlotte Musson helped me by her presence and by her eyes ; having achieved the final shape, I was pleased that I drew my inspiration from the live flesh …
Diary - February 1941

Pierre Puget (1622-1694) : one of the greatest French sculptors. Numerous works in the Louvre museum.

Bronze head of child : First price of the city of Paris 1928

Around Eros, Plutus and the Glory

The technique used in the finished work is oil painting on linen canvas. In her diary, Marguerite Jeanne Carpentier specifies that she « painted it with a simplified palette (…) The tuning of the harmonic clef [was] realized in dark golden tones, and a warm light pink note. »

Eros, Plutus and the Glory is a large canvas : 240 x 210 cms. The artist drew her inspiration from a poem by Charles Baudelaire (Spleen de Paris) :

Last night, two fine Satans and a none less extraordinary she-devil climbed the stairs by which inferno attacks the weakness of the slumbering man, and communicates with him secretly.
Charles Baudelaire - Spleen de Paris

After the death of the artist the picture was sold in 1945 at the Hôtel Drouot to one of her warm admirer who died a few years later. It was then bought by a Parisian gallery and sold again to a private collector.

M. J. Carpentier writes in her diary that she considered Eros, Plutus and the Glory as one of her most important works.